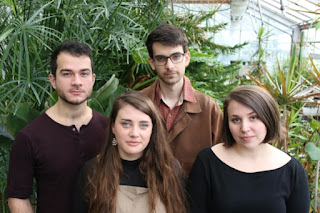 Montreal's Saint Lo. have this amazingly epic indie folk sound. Their new single, "Blueberry Fields," sounds like a warm mix of Neutral Milk Hotel and The Decemberists. According to the band, the song "... is that feeling of nostalgia, like the exhale of a sigh. the constant feeling of shifting away from the past, but keeping it close as you move forward." It's beyond gorgeous, with this hazy feel that stops just short of being twee. Despite having four members, the song sounds like it uses at least a dozen instruments that come in and out as necessary. "Blueberry Fields" comes highly recommended.

You can watch the video for "Blueberry Fields" below. We Could Be, the debut album from Saint Lo., will be available on April 15. For more on Saint Lo, check them out on Facebook and Twitter. Their current tour dates are below the video.

Email ThisBlogThis!Share to TwitterShare to FacebookShare to Pinterest
Labels: blueberry fields, Ken Sears, saint lo., we could be