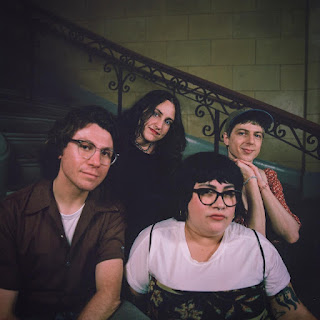 As with their previous single, "Chance Encounter," if you're a fan of 90's indie but mainstream leaning indie rock like The Lemonheads and Teenage Fanclub, chances are you're going to dig "Nowhere to Go." The latest from the Oakland based band has a little bit more of an edge to it while still being fun and not punk, so it's more akin to Teenage Fanclub than The Lemonheads. It's an upbeat sounding jangly indie rock song with one of the better 90's guitar solos recorded this century. It does stop a bit abruptly just after two minutes, but if our only critique is that we wanted more, that's hardly a bad thing.

Guitarist/vocalist Rob I. Miller says of the new song:

"This is a song about the sort of millennial malaise I've experienced as a result of being on social media. There were days during  lockdown where I was either depressed because I was doom scrolling or doom scrolling because I was depressed. Then I'd post something dumb to get attention (lol). It was as if I was disassociating online from myself irl. The bummer sentiment of the words contrasted by the poppy upbeat sound of the band is what makes "Nowhere to Go" a Blues Lawyer song to me."

You can watch the video for "Nowhere to Go" below. All In Good Time is due out February 17 on Dark Entries. The album can be pre-ordered on Bandcamp. For more on Blues Lawyer, check out the band's Twitter and Instagram.