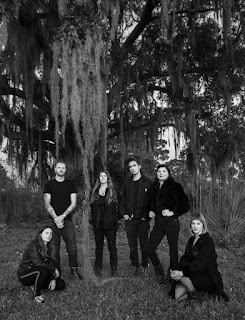 We've all heard metal with strings before, but no one is doing it quite like Anareta. The New Orleans based band are combining classical music with intense metal for a sound called chamber-metal. "Locality" shows off their sound perfectly. While a lot of metal with strings can kind of sound like a novelty, Anareta doesn't feel that way. The strings accentuate the force of the song that would be a brutal and killer track even without the strings included. As with a lot of music that we cover, "Locality" won't be for everyone, but if it works for you this is going to hit you hard and attach itself to your soul.

Anareta says of the song:

"'Locality' was the first song to coalesce when we began crafting our sound in early 2018, so it feels exciting and appropriate that it is also the first single announcing the release of our debut album Fear Not. Through an evolving collaborative process, we combined our musical tastes to produce a sound both beautiful and harsh. The emotive qualities of this piece inspired us to draw lyric inspiration from Dante's Inferno. Referencing a translation of this work, we present a perspective that questions his descriptions of the first layer of hell; what is the difference between this chaos and a mosh pit?"

You can listen to "Locality" below. Fear Not is due out April 8. For more on Anareta, check out the band's Facebook and Instagram.