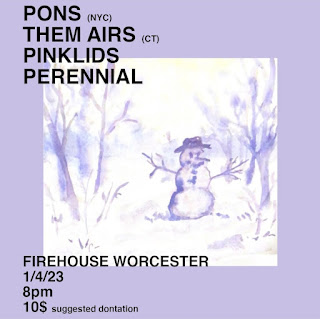 Last year I discovered a new appreciation for DIY venues. As more and more small venues close in and around Boston, these are becoming an absolutely vital space to see smaller bands. I've known about Worcester's Firehouse for a while now, but haven't had a chance to get out to see a show there. I've also been meaning to see Perennial for over a year now, but haven't had a chance despite how often they play in the area. Wednesday night everything finally aligned and I got a chance to do both.

Perennial opened the show and just set the tone for the evening. Their very specific version of punk rock that is loud, and noisy, and just a fucking blast was everything I wanted it to be live and then some. This is a band that absolutely loves what they do, and that joy was contagious. Vocalists Chelsey Hahn and Chad Jewett had a seemingly impossible amount of energy as they jumped and danced around as much as their instruments would allow them to. They even threw in a cover of "Heard it Through the Grapevine" that was accompanied only by fingersnaps from the audience. Songs like "Food for Hornets" and "Perennial in a Haunted House" must be seen live. I can't think of another band that plays music this heavy that is just pure joy and fun.

Pinklids are going to infuriate most music journalists and critics, because they're virtually impossible to categorize. Their songs swing wildly between pure pop, indie rock, noise rock, and maybe a dozen other genres, sometimes within the same song and other times all at once. Some parts of their songs were pretty and dance friendly, and others were thrashy and mosh friendly. Frontperson Amber is a future rock star. Some people just have that certain something, and she had it just walking up to the microphone. Considering this is a band that doesn't seem to have any official music out, that's saying a lot.

Connecticut's Them Airs sound wildly different live than their recorded music does. Their albums and singles seem more reserved and in some cases more on the electronic side of things. Live they were more along the lines of Daydream Nation era Sonic Youth, if Sonic Youth wanted to make you dance. If a Sonic Youth inspired dance party sounds fun to you (which it should), you're going to dig Them Airs.

PONS made the drive up from New York, and thank god they did. As they took the stage, I noticed one of the drummers (there were two) was wearing a mask, so I immediately thought of Lightning Bolt. That comparison was apt musically, as PONS play this out of control style of noise rock. Usually I'll say a band seems like they could go off the rails at any moment but keep it together. PONS go gloriously off the rails pretty much at all times, but that seems like a stylistic choice. Their playing style reminded me a lot of Ex Models. PONS stay a little more true to the rules of song structure than those bands, but only by a couple of rules. They were thrilling live, and it's a show you need to experience.