The Umbrellas - "She Buys Herself Flowers" 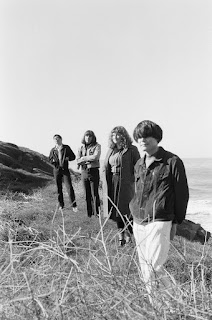 Some bands just sound like California. San Francisco's The Umbrellas sound like San Francisco in the best possible way. Their latest single, "She Buys Herself Flowers," has that classic Bay Area pop sound all the way back to the 1960's. This isn't a retro throwback song, though. Far from it. The Umbrellas inject the sound of the past with a modern indie dream pop sound. Those two eras and genres mesh together remarkably well. If anything, "She Buys Herself Flowers" sounds like a forgotten vintage classic covered by a dream pop band of today.

In a press release, the band explains the song and video:

“'She Buys Herself Flowers' is about finding value and worth in oneself instead of dwelling on what that-one-person-said-that-one-time. Keith wrote the catchy riff and we all worked off of it to create a song that lingers around like a short story. The video was made when we stayed with our good friend Zoë Zag in LA. All five of us crammed in her car and ran around town with her pointing at things for us to climb on top of or underneath. She went on to Xerox each still into a video that immortalizes the freedom of touring and finding solace through friendship and music."

You can watch the video for "She Buys Herself Flowers" below. The Umbrellas' self-titled album is due out August 6 on Slumberland Records. You can pre-order/pre-save a copy here. For more on The Umbrellas, check out the band's Bandcamp and Instagram.

Email ThisBlogThis!Share to TwitterShare to FacebookShare to Pinterest
Labels: Ken Sears, she buys herself flowers, slumberland records, the umbrellas