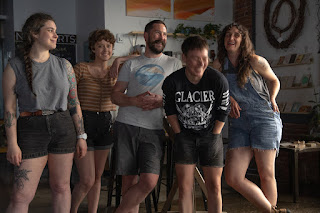 Hailing from Peterborough, NH, Footings is a musical project led by Eric Gagne along with members of Pile, Bunny's a Swine, and Rick Rude. Their latest single, "Bayou," is that kind of ultra chilled out indie rock that is so laid back it can barely be considered rock. Despite the amount of strings and the quiet vibe, "Bayou" isn't even remotely folk. Well... it does check some neo-folk boxes, but folk isn't the intention of the song. It's an atmospheric rock song with hardly any elements of rock.

"I went on a surfing trip to the west coast of Nicaragua a few years back. One day, everyone took a ride to Leon to rattle around there on a day with choppy waves, but I stayed behind. I spent most of the day recovering from a night out drinking tequila, sitting on this creaky covered porch overlooking the ocean. The beach was wild horses and packs of dogs playing in the shallow water. There were cops with machine guns stealing fish from the fishermen coming in from the morning work. I drank cold beer and smoked lousy weed, playing this old beat up acoustic guitar, scratching down lyrics and chords as I went. Bayou was written right there, finished as the halfmoon started rising, looking like a kid's drawing of a boat."

You can listen to "Bayou" below. Annihilation is due for a release this summer. For more on Footings, check out the band on Facebook. The band currently has a live show scheduled on July 31 at NOVA ARTS in Keene, NH.