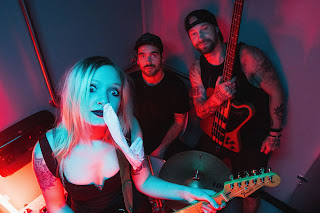 The debut single from Ontario's The Wake might be more 90's than anything actually from the 90's. "The Wake" is filled with guitars alternating between buzzy and crunchy, and a nearly impossibly catchy chorus. The press release describes them as grunge, but this is more along the lines of mid-90's post grunge. You're going to hear more Eight Arms to Hold You era Veruca Salt or The Donnas. "The Wake" is a killer 90's inspired alt-rock jam that you may end up loving.

In a press release, the band says of the song:

"Sometimes, Paige will mash together a bunch of her favourite lyrics from different songbooks and combine them into one. None of the lyrics are corrupted by any deliberate intention, and so 'The Wake' is not to be taken literally."

You can watch the video for "The Wake" below. Foolproof has a debut EP due out soon. For more on Foolproof, check out the band on Facebook and Instagram.