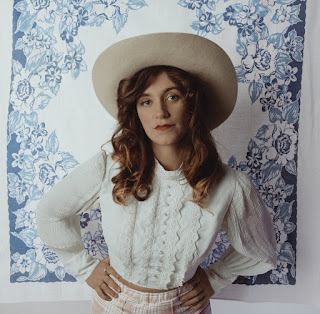 Despite Jeff and I having fairly similar tastes in music, our top ten albums of the year tend to be wildly different, with only one album on both of our lists. It's only June, and we've only heard three original songs from her (although we have extensively covered her cover songs), but it's safe to predict that this year it will be from Sierra Ferrell. Her new single, "The Sea," is this completely original blend of old timey country, jazz, cabaret, and even a little show tunes. Ok... more than a little. It's an amazingly fun song that is also a brilliant tune. Everything about "The Sea" is perfect. Not many songs can be fun and haunting, but Ferrell pulls it off. "The Sea" is a tiny bit over the top at times (like I said, it includes elements of show tunes and cabaret) but Ferrell just exudes such a sense of charm that you can't help but be completely won over.

In the YouTube description of the video, Sierra Ferrell says of the new song:

"I wrote 'The Sea' to express my love for the ocean and the mysteries it possesses (my name is 'Sea-erra,' after all!). The song came to me while I was living out of my van in Port Townsend, WA. The beach quickly became one of my favorite places. I would walk there every day and look for items that had washed ashore. At the time, I was seeing a blue-eyed Pisces and there was someone else I was interested in who was a Cancer. Those are both water signs so that’s how they weaseled their way in there!"

You can watch the video for "The Sea" below. Long Time Coming is due out August 20 on Rounder Records. You can pre-order your copy here. For more on Sierra Ferrell, check out the artist's website.