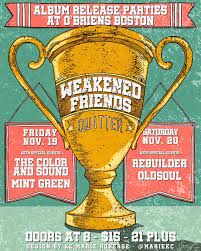 It was three years almost to the day since I had last seen Weakened Friends. That's a long time to not see one of your favorite bands, especially when they're fairly local. When the band announced a two night stand at the tiny O'Brien's Pub, I knew I had to go, especially seeing as they hand picked their openers which are a who's who of Boston indie rock right now.

First up was Oldsoul. This is a band I'm wasn't that familiar with. I saw their name on multiple bills I wanted to go to, but never quite make it. As this show got closer, I listened to them on Spotify a bit. I enjoyed them, but nothing prepared me for their live show. Oldsoul on record is a pretty tame indie rock band with some strong pop sensibilities. Live they are an absolute beast of a band. They played far heavier than I could ever have expected them to, especially since I think I have been confusing them with another band that leans a little folkier than they are. This was pure indie rock fury with a punk edge, but still with that pop sensibility they have on record. Oldsoul are one of the better live show discoveries I've made in years, so expect to see a lot more of them around here in the future.

Rebuilder was next, and I wasn't really looking forward to them. I saw them opening for The Dead Milkmen once, and just didn't get into them. They weren't a bad band, just a little too straight up pop punk for my personal taste. I knew seeing them at O'Brien's in an opening slot was a Big Deal, though. Two months ago they headlined the much bigger Sinclair (The Sinclair has a capacity of 525, O'Brien's is 75), and they have their own two night stand coming up at O'Brien's for New Year's Eve. On Saturday night they completely won me over as a fan. Maybe they've grown as a band since that night, or maybe I've just been in a more open mood since live music has come back. Either way, their brand of pop punk seems doesn't have that quality that makes me feel old. No, Rebuilder are making pop punk for adults these days. It was all the fun of pop punk, and maybe even emo. They played a high energy set that was absurdly fun. Even if you're a crusty middle aged indie rock snob, you need to check this band out.

Weakened Friends just released a killer album that is wreaking havoc on journalist's year end lists as we speak. It's a little more pop than we've heard from them in the past, but in the best possible way. When played live these songs were an absolute revelation. They played ten out of the album's eleven tracks, with another eight coming from previous releases. Saturday night these songs became giant rock songs played with an energy and joy that you could feel pouring off the stage. This was a noisy, loud rock show with the trio playing in that perfect mix of loose and tight that you want from an indie rock band. Brand new songs like "Quitter" and "Spew" got the same intense love as old favorites like "95" and "Main Bitch." The old songs may have gotten a better initial reaction as they started, but we've only known some of these new ones for maybe thirty six hours at that point. This was a band playing in front of die hard fans for the first time in a long, long time. It may have been the most fun night of live music I've had since this whole mess started back in March 2020.