Shilpa Ray - "Bootlickers of the Patriarchy" 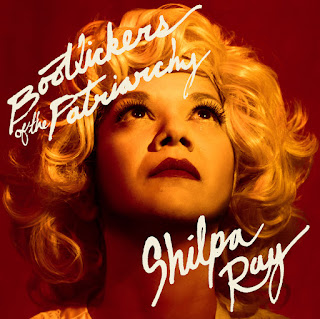 When I saw that an artist had a song called "Bootlickers of the Patriarchy" that included a B-side of a Ministry cover, I had a pretty good idea what it would sound like. Most likely industrial, maybe punk or metal, but obviously loud and heavy. Shilpa Ray surprised me with this song. Ray has spent time in bands like Beat The Devil and Her Happy Hookers, as well as touring as a back up singer for Nick Cave. "Bootlickers of the Patriarchy" is about Senator Susan Collins and her press conference after Christine Blasey Ford's testimony at the Kavanaugh hearings. For the first half, it's a quiet torch song. It's not quite straight out of the 50's, but it sounds like a haunting cover of a classic 50's song. The second half is more industrial, but the 80's dance friendly version of industrial. It's angry without being as aggressive as industrial got in the 90's.

In a press release Shilpa Ray says of the new song:

“It’s about women who succeed from undermining the success of other women or choose to gain success from exploiting the oppression of other women. This is a character who has taken many forms throughout history, the kind of woman who seems perfectly content playing Gamma to the Alpha male. ‘Bootlicker’ is my direct challenge to the notion of ‘women supporting other women,’ as well as the falsehoods and unrealistic expectations that come with a statement like that.”

You can listen to "Bootlickers of the Patriarchy" below. The song is available as a single with a B-side of a cover of Ministry's "I'm Not an Effigy." You can get a copy here. For more on Shilpa Ray, check out the artist's website.