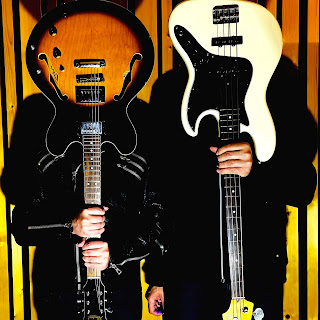 If Belgian stoner alternative rock sounds intriguing to you, you'll want to check out Bar II. The mysterious duo have recently released the single "Let You Down." Since it does land in the alternative/stoner category of music, it's going to have some comparisons to Queens of the Stone Age, which are more than fair. "Let You Down" doesn't quite have the hard rock edge of QOTSA songs, although it does have some similar guitar sounds. Bar II have a more alternative rock/pop feel to it than metal. It's more of a mix between a band like The Kills and QOTSA than just pure stoner rock.

In an official statement, the band says:

"In our present urban times, over-saturated by electro and hip-hop, dominated by show-offs and pretenders, Bar II keeps their mysteries to themselves. They won’t abide by the dictatorship of imagery only to focus on pure, raw, dark deranged rock music. May they raise the bar, too."

You can watch the video for "Let You Down" below. The song is available as a single here. For more on Bar II, check out the band's Twitter and Instagram.

Email ThisBlogThis!Share to TwitterShare to FacebookShare to Pinterest
Labels: bar ii, Ken Sears, let you down