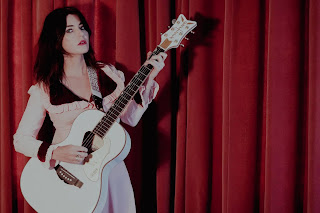 The upcoming solo release from Laura-Mary Carter (one half of Blood Red Shoes) is being called "... more contemplative... than her usual guitar-shredding anthems," but "Ceremony" is anything but a quiet acoustic solo song. "Ceremony" is a huge rock song. It reminds me a lot of Kristin Hersh's louder solo work. It has loud, tribal sounding drums with a swirling sound of feedback looping around everything to help keep it all together. At the center of it all is Carter's vocals which sound like a mixture of Hersh and Tori Amos fronting an all-eras-encompassing Sonic Youth. Yes, that's a lofty comparison but it will hold up when you hear it. If you're unfamiliar with Blood Red Shoes like I am, this one is going to have you diving straight into their catalog.

In a press release, Laura-Mary Carter says of the new song:

"The song is about my career. It’s about being in debt to someone and trying to break free. It's about the feeling of not having a choice but to make music because that's who I am but that sometimes comes with a price or with massive sacrifices. It's about making peace with the choices and decisions I have made over the years and moving forward."

You can listen to "Ceremony" below. Town Called Nothing is due out December 3. The album can be pre-saved/pre-ordered here. For more on Laura-Mary Carter, check out the artist's website.