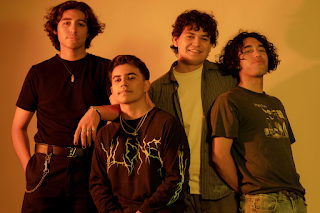 I truly love the variations on shoegaze that have been coming out lately. Antelope Valley, CA's Bed have put their own spin on the sound with "Blue Sweater." The song has a lot more energy to it than you typically get with shoegaze. In fact, this is downright bouncy. "Blue Sweater" is more like mid-90's alt-rock that still has some of the crunch of grunge but is starting to veer more into a power pop sound. And, of course, it also has that swirling haze you get with shoegaze.

Bed started out as a solo bedroom project by frontman Ebed "bed" Moreno. He talks about the origins of the band:

"At my first show, I didn't have a band at the time, so my band was literally my laptop plugged into a PA and me on guitar and vocals. and people actually liked it.

“Eventually those backyards turned to venues and the crowds got bigger. We really hit a shift when we had the privilege of going on tour with one of my favorite bands, Beach Goons, and our first show was at the Fonda Theatre in Los Angeles-sold out to 1500 people. I can confidently say we put on our best performance that night. Since then, we've been going up. especially after the album dropped.”

You can listen to "Blue Sweater" below. Bed's self-titled debut has just been re-released via Wiretap Records. For more on Bed, check out the band's Twitter and Instagram.