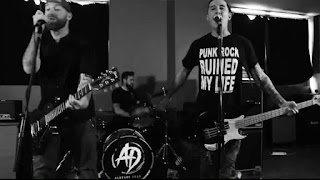 I talk a big game about not liking pop punk, but then a band like Already Dead comes around and makes me have to sheepishly admit that I do kinda like it. The Massachusetts band's debut single, "Stability," is a fast and bouncily furious song with some killer shout a long choruses and that blue collar edge that only New England pop punk bands can truly pull off. It has all the anger a song needs to be punk, but it doesn't forget that you're supposed to have fun, too. I say this a lot here, but Already Dead has some huge crossover mainstream potential. You're not going to want to sleep on these guys.

Dan Cummings of Already Dead says of their new song:

"'Stability' is a wanderlust song about chasing a dream or a life while still maintaining the life you've built. It's about the need or desire to go out and pursue something but still knowing where your home is."

You can watch the video for "Stability" below. My Collar is Blue is due out in October. For more on Already Dead, check out the band's website.