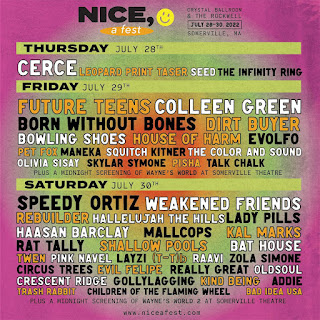 In its second year, Nice, a Fest took over The Rockwell and Crystal Ballroom at Somerville Theater for three night (four if you count the "after party" on Sunday). I wasn't able to go for all three (or four), so I made it for just Saturday. And seeing how I couldn't pull off twelve hours of live music at my advanced age, I made it a late afternoon/early evening start time. So apologies to all the bands I didn't see! Here are my five favorites from Saturday at Nice, a Fest, in no particular order.

This one came out of nowhere for me. Circus Trees are a band out of Marlborough, MA made up of three sisters. Saturday night they had a replacement drummer, and they announced that they would be playing sad music before they started, which, they did. But Circus Trees are hardly a mopey band. Sure, their songs do have mopey parts, but it's more like if shoegaze was really, really heavy as well as beautiful. Their quiet parts were shockingly lovely, but when the loud parts kicked in they just brutalized the audience with the sheer hardness of the music without losing any of the beauty. Circus Trees are a band we can't wait to hear more from.

Lady Pills is an artist I've wanted to see for a while now, and Saturday was the first time it worked out. Despite some sound issues early on (part of only having 15 minutes for each band to tear down and the next to set up was sound check was pretty much the first song or two), Lady Pills delivered. Pop-infused indie rock is all the rage these days, but Ella Boissonnault's trio brought a lot more noise to their songs live than I expected. The songs were still catchy as they could possibly be, but a song like "My Weight" had an unexpected grit to it live. I was a fan before, but Saturday night turned me into a superfan.

Hallelujah the Hills have been covered here quite extensively, with good reason. As great as their albums are, their live shows are just next level. Seeing them live is just a celebration of music and life, even with a song like "People Keep Dying (And No One Can Stop It)." They only had thirty minutes Saturday night, and they did a mix of fan favorites and odd choices which quickly became fan favorites. "Transparent Chart of the Heavens" is a 6:12 epic on I'm You. At Nice, a Fest it seemed to expand for at least ten, if not fifteen minutes and became one of the greatest songs I've ever heard. Needless to say, this won't be the last time you read about Hallelujah the Hills here.

I don't think I've ever been more wrong about a band than I was about Rebuilder. The first time I saw them live, they were fine but pretty standard pop punk which normally isn't my thing. The next time I saw them last year for Weakened Friends' album release show, they had transformed into a fantastic pop punk band. Saturday night they were somehow even better. I think what sets them apart is that while their sound fits into the whole pop punk/emo thing, they're more early/mid 90's pop punk and emo. They're more along the lines of Jade Tree and Vagrant Records than when pop punk ruled TRL while still having the pop hooks of those ultra mainstream bands. Plus, they are insanely fun live. It took until maybe the last three songs of their set for a little mosh pit to finally break out in the middle of the indie rock hipsters, but the music does call for such shenanigans.

I've been going Weakened Friends shows for six years and three days as of the show on Saturday. (The first time I ever saw them was opening for The Sheila Divine at Ralph's Diner on July 27, 2016.) They've always been a fun little indie rock band to see, playing loosely and having a great time. 2022 is the year they became full fledged rock stars. I have no idea what happened between their album release show in November 2021 and now, but it was like seeing a brand new band. Everything I've always loved about them was still there, but it was like Weakened Friends are playing with a new confidence and purpose. If you've been meaning to get out and see them live, do it ASAP because they aren't going to be our little secret band for much longer.