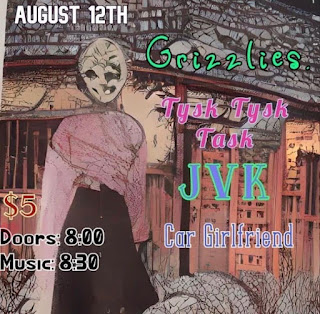 On a fairly last minute whim, I ended up heading down to Pawtucket, RI to see Tysk Tysk Task at the News Cafe. Sure, this would be the... fifth (?) time I've seen them since April, but Samantha Hartsel and Danni Gannon just keep improving with every show while still tinkering with songs each and every time. If I had a free Friday night, how could I miss it?

Opening the show was Car Girlfriend. They had a very raw funk meets metal and alt-rock sound. Some songs were almost pure funk while others were almost pure metal, with other songs being nearly every step in between. Plus, with vocalist Garrett Hopkins mostly rapping during songs, it reminded me of a very, very early Red Hot Chili Peppers. Not many bands can pull off the party band vibe while still blasting an angry song called "Cop Killer" (not a Body Count cover, by the way), but Car Girlfriend pulled it off.

Next up was JVK, which I can't tell if it's a solo project or a band based on their social media. JVK play this interesting mix of straightforward alt-rock with a much noisier sound and an almost pop meets goth vibe. They continued the aggressive yet fun theme of the night. It's definitely music that's somewhat mosh friendly while still being nearly pop, even if no brand of pop is quite this noisy. It's always fun to see younger bands play around with styles and sounds to make their own.

I should be bored with seeing Tysk Tysk Task by now. A lot of bands will come around once a year and I'll skip it since I just saw them the year before. But something just connects me to their music. Hartsel seemed much chattier than normal on Friday evening and explained the stories behind a few songs. "Flies," which is quickly becoming a favorite, was written at the beginning of the pandemic when she was afraid to leave the house to bring out trash. The pairing of "Working On It" and "Working It Out" is starting to insert itself into my brain permanently and is haunting my waking hours. It was also the first time I saw "On My Own" live, which is just mesmerizing. When performing live, Tysk Tysk Task are developing a connection similar to The White Stripes, but more of an equal partnership. Their songs have a specific structure to them, but Hartsel and Gannon improve off each other with a comfort that you usually only see with musicians that have played together for years.

Closing the night out was Grizzlies, another band that had a familiar yet unique sound. They had a standard blues rock sound but mixed with indie rock. It was like Tedeschi Trucks Band and Lake Street Dive if they were filtered through 120 Minutes. To keep the Tedeschi Trucks band comparisons going, Grizzlies' singer had a voice far superior to what you typically get in an indie rock band, and their guitarist blew out these insane solos with an ease I've only ever seen with Derek Trucks. It's a great night when you can see four local bands all taking the familiar and transforming it into their own unique sounds.