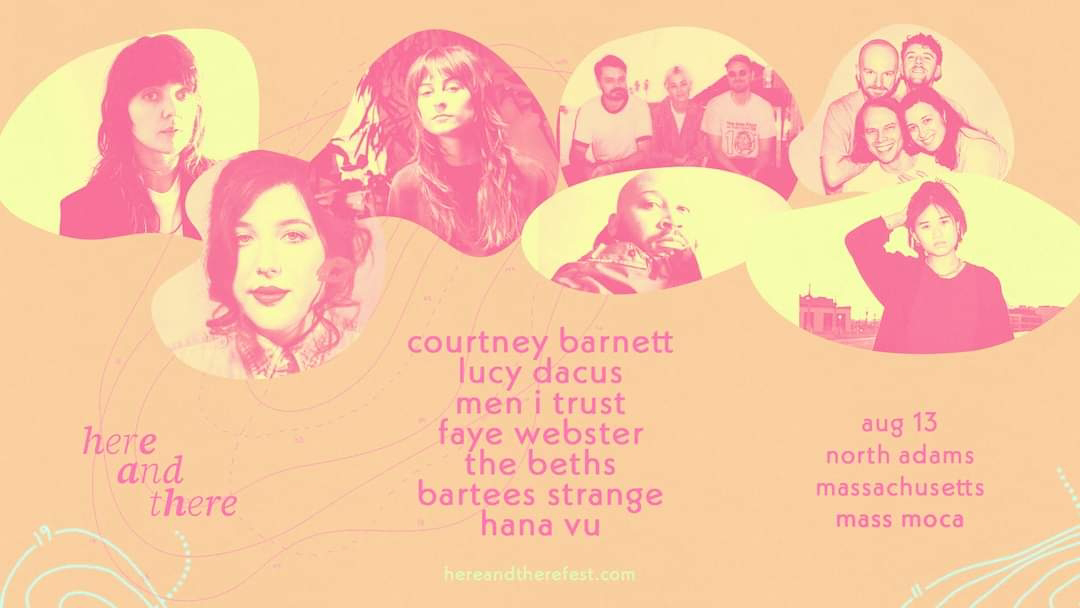 When I first heard about the Courtney Barnett curated Here and There Festival, I knew I wanted to attend. Courtney Barnett putting together a travelling festival with a revolving group of artists playing? When I saw our local one was being held at Mass MoCA in North Adams, which is one of my favorite festival venues, and was going to be one of the larger all day ones, and also included Hana Vu, Faye Webster, The Beths, and Lucy Dacus, all of which are artists I'll go see any time they play in the area? How could I miss this?

Despite having a logistical mishap on the way and missing Hana Vu, I was in great spirits. Besides the amazing musical line up, that was one of the great joys of Here and There: Everyone was happy. There was no aggression from everyone, everyone was nice and polite to each other, and everyone was just thrilled to be there. Even in the photo pit the vibe was just chill and friendly. I overheard two young women saying they drove twelve hours to be there because they loved so many artists playing Saturday. The entire day was just a joyful celebration. I feel way too hippy dippy saying that, but it was beautiful.

The first artist I saw of the day was Bartees Strange. I hate admitting this, but I haven't exactly been a fan of his. His albums are fine, but I just haven't connected with them. Maybe it's just been too pop oriented for my personal taste, but seeing him perform live was a revelation. His live show had an edge that is missing on his albums and the performance was still pop but with a lot more indie rock to it. Plus, Strange is one of the most compelling performers I've seen in a long time. You just couldn't stop watching or getting sucked in by his performance. I definitely owe his albums another chance after Saturday.

Next up was supposed to be The Beths, but I had missed the news that Men I Trust had pulled out two hours before due to COVID. Instead of The Beths, out came Caroline Rose, one of my most beloved artists who I was disappointed wasn't playing the North Adams show. Nothing against Men I Trust, but this was an unexpected delight for me. Rose played a brief solo acoustic set, playing mostly new unreleased songs or old unreleased songs. She talked so much between songs that she joked it was more of her stand up set than her musical set, but she's so damn charming no one cared. No matter what she played, this was an unexpected delightful surprise for the day.

The Beths played next, and seeing them play in front of thousands of people was a huge difference from the last time I saw them at the eighty five person capacity Atwoods Tavern, but their show was still special. There's just something about The Beths' music that feels intimate, even at an outdoor festival show. They seemed to be the first band that the crowd was already pumped to see before they started playing, and if anyone wasn't already they were by the end. Their blend of indie pop rock is incredibly well suited to an outdoor festival in a gorgeous setting. Back when I saw them in 2018 I had commented that I was looking forward to seeing the chorus of "Little Death" sung by a field of people. I didn't quite get that at Here and There, but it was close enough.

Playing between The Beths and Lucy Dacus might have been the perfect timeslot for Faye Webster to play in. Her brand of ultra laid back retro hip pop chilled out the crowd without losing anyone's interest. Personally I was starving at this point, so for me it was the perfect soundtrack for grabbing some dinner on top of the hill while watching the sun set behind the stage. Webster has some die hard fans who treated every song like it was the most vital one on the planet. She definitely made some more fans that night.

I've said before that Lucy Dacus might have the most dedicated fans in music today, and Saturday proved that die hard fanbase continues to grow. As an artist gets bigger, they seem to attract more casual fans who like a few songs and are more there out of curiosity. Not with Dacus. Each new fan is just as die hard as the ones before. I haven't seen thousands of people as transfixed on a single performer like this since Tori Amos in the 90's. At this point in her career, Dacus' set was like a best of album. Songs like "VBS," "Hot & Heavy," "Brando," "Thumbs," "I Don't Wanna Be Funny Anymore," and the closer of "Night Shift" are all from just three albums released in just a five minute period. For a cover, she performed her recent dreamy cover of Cher's "Believe," and to close out the show "Night Shift" became a sing-a-long/shout-a-long for the thousands of people in attendance. Walking around the crowd after the set, I overheard a large number of people talking about just bursting into tears during "Night Shift," even people who had never heard it before. "Night Shift" is a gorgeous, moving song, but there was just something in Dacus' performance that night. It's very rare to think you just watched someone become a true star in one performance, but that's what Lucy Dacus did Saturday night.

Closing out the evening was festival curator Courtney Barnett. Playing after such amazing sets by Lucy Dacus, Faye Webster, and The Beths should have been a rough task, but Barnett nailed it. Her 90's style loud slacker indie rock was the perfect thing to keep a tired crowd going. Her entire vibe was completely different from anyone else playing. That was what worked best about Here and There: Every artist was completely different but they all fit perfectly together. Songs like "Avant Gardener," "Elevator Operator," and "Depreston" are just perfect live. Towards the end of her ninety minute set, Barnett was joined by Faye Webster for "An Illustration of Loneliness (Sleepless in New York)" and then by Bartees Strange for "Pedestrian at Best" and "Nobody Really Cares if You Don't Go to the Party." It was an epic set of music for sure.

What might have summed up the night perfectly happened after the concert ended. Courtney Barnett walked off to Whitney Houston's "I Wanna Dance with Somebody," and while the majority of the crowd started filing out, hundreds of indie rock fans danced wildly to the music in the field without a trace of irony. Just music fans celebrating a joyful day of music in the happiest way possible. And that's what Here and There was all about.