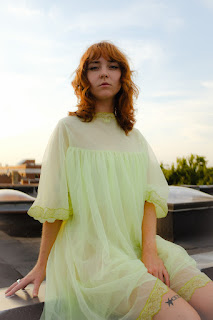 The latest single from KT Laine is a mesmerizing study of contrasts. "Again" is the kind of song that exists somewhere between folk and indie rock. It really doesn't fit in either category the way a band like Big Thief doesn't fit into either genre. It has just a little too much rock to be folk and too much folk to be rock. Plus, "Again" is really synth heavy which typically doesn't work for either genre. There's also a strong sense of 70's groove, so this song should not work at all. But KT Laine pulls off all of these sounds to create something that is both new and familiar at the same time.

"Again" was written while KT Laine's partner was on tour and she was considering ending the relationship. She says of the song:

“At times I was grateful for that distance, and other times I really did mind that it was such a long way home. This song is a double edged sword in that way."

You can watch the video for "Again" below. Knock Knee will be out on Victory Pool Records. For more on KT Laine, check out the artist on Instagram.