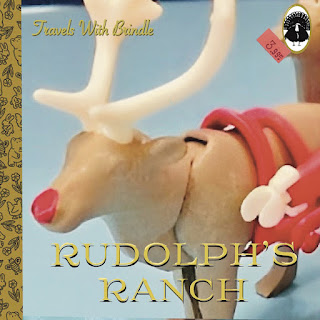 We agree that it's probably too early for Christmas music, but we hope you'll forgive us once you hear this one from Travels With Brindle. The lo-fi ukulele project from Chealsea Spear has released "Rudolph's Ranch," and except for the into that's borrowed from "Rudolph the Red-Nosed Reindeer" it's not very Christmas-y. In fact, if you're not paying much attention to the lyrics you'd probably miss out on it being a Christmas song. Plus, it's a very melancholy song, which isn't very traditionally Christmas-y... but we all know how that can work. This is a Christmas song for people that aren't really into Christmas music, or are really into Christmas music.

“This was the second song I wrote for the project, when I decided to write an album inspired by The Idiot. I thought I wanted to write a bunch of songs that sounded like ‘Ivan’ and I knew this one had to stand out and show the listeners it wasn't part of the world of the rest of the album. I also knew I wanted it to be a sad Christmas bop.”

You can watch the video for "Rudolph's Ranch" below. The song is available as a single with B-sides of a cover of Big Star's "Jesus Christ" and the original "Sister Cities" over at Bandcamp. For more on Travels With Brindle, check out the artist's Facebook and Twitter.