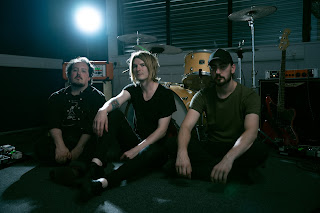 Buckle up before you listen to this new song from Penny Rich. The Cardiff based band has released a monster of a song in "Last Meal." The song was inspired by death row inmates in the US being allowed to choose their last meal before being executed. This is a bombastic and loud song mixing the very best elements of both punk and grunge. Nirvana comparisons are going to be made with this band quite a bit, but I'm also hearing hints of The Jesus Lizard, Death from Above 1979, and Dead Kennedys. "Last Meal" just bursts into a breakneck speed right from the start and never lets up. We say this a lot, but you're going to want to keep an eye on Penny Rich. This band could end up doing huge things.

“The song explores the idea of a last meal as a metaphor for empty, superficial pleasures, indulged in to temporarily escape the anguish, anxiety or depression the consumer may be experiencing. It’s the juxtaposition between feelings of superficial satiety and profound emptiness. In short: empty pleasures that fail to cure the real issues at play.”

You can listen to "Last Meal" below. For more on Penny Rich, be sure to check them out on Facebook and Instagram.