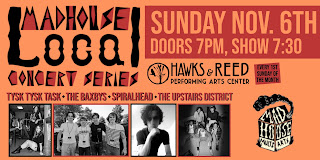 For a while there we were at risk of becoming a Tysk Tysk Task fansite, but we haven't had a chance to cover them in almost two months. Luckily, they scheduled a show out in Greenfield, MA on a Sunday night that worked for me, so even though I hadn't heard of the other three bands on the bill I knew I had to make the trip out west. Plus, Hawks & Reed is becoming a favorite venue, so how could I resist?

Tysk Tysk Task opened the show which was my first time seeing them with new bass player Paul B. Having a regular bass player adds a completely new dynamic to their live shows, but what is most compelling about Tysk Tysk Task live is just how much they tweak their songs during shows. You're Sorry More has been out for just under two months, and while most bands would make the songs sound as close to the album as possible, Tysk Tysk Tasks' songs just keep evolving at every show. This was the sixth (maybe seventh?) time I've seen them this year, and I can honestly say no show has been anywhere near the same as the one before it. There are lines that Samantha Hartsel screams at one show and then barely whispers the next. For some reason this is the show I ended up honing in on Danni Gannon's drumming more than the others, and I was pleasantly surprised at how jazz influenced it is. It reminded me a lot of Steve Shelley's drumming as they both are able to control the chaos happening around them.

The Baxbys were up next, and I know this might sound dismissive but I truly mea this as a compliment, but they sounded exactly like every mid-90's film soundtrack that I loved. Back then it seemed like every movie (Dumb & Dumber, Mallrats, Angus, etc.) had a killer alt-rock soundtrack. They would have a few bands that you knew and already loved, but there would always be a few that you discovered through the compilation. For some reason The Baxbys reminded me of the Empire Records soundtrack in particular. Singer Alex Norlund was an incredibly compelling frontman, especially considering that the band only formed in 2021. This could be the kind of band that ends up crossing over, so keep an eye out for them.

The Upstairs District seemed to have the biggest crowd of the night, and it wasn't just because they hail from Greenfield. I couldn't quite put my finger on their musical style during their set until they played a cover of MGMT's "Electric Feel." Their blend of indie rock meets dance music fits right into the style of music MGMT play, and they were obviously a truly fun band. I started out more towards the back at the start of their set, but they slowly pulled me closer and closer to the stage as they went on. They're another band to keep an eye on in the near future.

Spiralhead closed out the show and kept to the theme of the night which was four completely different music genres at the same show. Spiralhead is an acoustic singer-songwriter playing folk-ish music with an electric guitar player who also provided some backing vocals. The pair played their set of fairly lo-fi friendly indie folk. It was mostly originals with an Elliott Smith cover and an Alex G cover. It was a compelling set that had a challenge of following three louder, more high energy artists, but Spiralhead pulled it off.

This was the kind of show that I went to for one band, and once I realized they were opening I had planned on taking off early, it being a Sunday night and all. I ended up staying for the entire night thanks to three other bands I ended up enjoying.