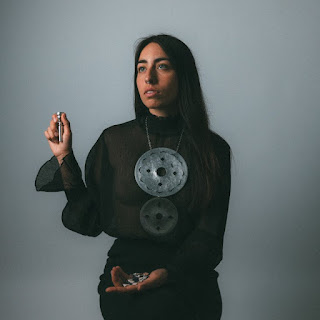 It may not be my normal music of choice, but I love Mali Obomsawin's new album Sweet Tooth. My taste in music can lean pretty far on the experimental side of things, but a three piece suite of music that is a mixture of jazz, folk, blues, Native cultures, etc. is new territory for me. But, I'm all about new experiences, so I headed out to Club Passim to experience it live.

Mali Obomsawin's Sweet Tooth is about Indigenous resistance, which she made quite clear while discussing the songs. She discussed how large the Wabanaki territory once was and how they are now limited to two reservations near Quebec, the influence (or attempted influence) of Jesuits on the Wabanaki, and joked about the lack of cultural relevance of Boston. It was definitely a night of challenging music, with plenty of discordance and experimenting going on with the music. As experimental as the recorded album is, live it was both more experimental and less experimental. At times the 6tet strayed away from the record, which almost made the songs more traditionally jazz, especially when the horn section had time to solo. It might sound weird saying that free form, improvisational jazz is "traditional," but compared to other parts of the suites, it was very traditional.

Club Passim definitely attracts an older crowd, especially with memberships and traditional folk music. I was curious how this crowd would handle the noise and dissonance of Sweet Tooth, but everyone was much more open minded than I expected and Mali Obomsawin 6tet was met with enthusiastic applause between songs. This is music that requires an open mind and rewards those that have it.

Olivia Shortt opened the show and asked if we were ready for "... weird shit and noise," and she definitely delivered on both of those. She played a thirty minute composition where she played notes on a saxophone and vocalized, looping those over and over to flesh out the musical piece more. It seemed more like something I'd expect to see opening for Sonic Youth than at Club Passim. At times it worked for me, and at times it didn't. But that's how "weird shit and noise" works best.