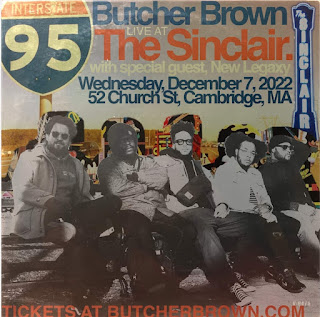 There's a lot of talk about rock being dead. The kids aren't listening to rock any more in favor of hip hop and electronic music. Since rock is supposedly dead, you'd expect jazz to be even more dead since they've been saying jazz is dead for decades longer. Apparently no one told that to the kids in attendance for Butcher Brown's show at The Sinclair in Cambridge.

That was truly what was so shocking about Butcher Brown's show. The crowd was mostly people in their twenties with just a few of the typical, older jazz crowd speckled throughout. Sure, Butcher Brown aren't entirely a classic jazz band as they heavily use hip hop, funk, and soul, but they are jazz. Still, they had an audience filled with indie hipsters, hippies, ad hip hop heads.

They pulled this off just by being great. Hip hop seems to be the gateway for a lot of their appeal. While Marcus Tenney stuck with playing trumpet and saxophone more than he did rapping, they used hip hop samples throughout along with some sampled drums, which just added to Corey Fonville's live drums. The Richmond, VA quintet seemed to stick more to their instrumental jazz songs than to their more rap based songs, but even though that's how I got into them, I didn't miss the vocals and found myself enjoying the jazz instrumentals more than I expected. Although "#KingButch" was a lot of fun live.

Despite considering myself a fan of jazz, actually getting out to see live jazz is a rare event for me, but if Butcher Brown's show was any indication, I really need to do it more often.