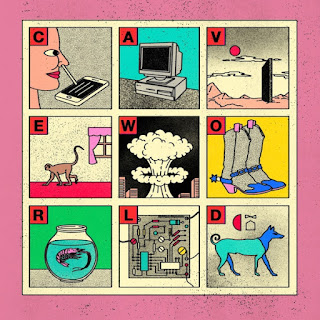 It's somewhat fitting that 2022 was the year that featured an album with a song from the perspective of every conspiracy nut you've encountered on Facebook, and it's both the most punk rock thing since Taylor Swift rerecording her old material to stick it to Scooter Braun and can't be quoted here without putting the blog in danger of being blacklisted. But here we are, "Creepy Crawlers" and all with the latest from Viagra Boys.

It was easy for me to sort of write off Viagra Boys as a mclusky-style post-punk act with a better sense of melody after 2019's Welfare Jazz, which was legitimately great but not trying to change the universe. Cave World, in comparison, has a lot to say and isn't trying to play nice while saying it. Whether ranting like Alex Jones in "Creepy Crawlers," describing insurrectionist types in "Troglodyte," or entertaining scientific hypotheses about the origin of man in "The Cognitive Trade-Off Hypothesis," it's music with a message that expertly balances the line between awareness and absurdity.

I didn't expect to go back to this album as much as I did this year, but listening again recently as I finalized my best-of this year, it reminded me of how great this was.