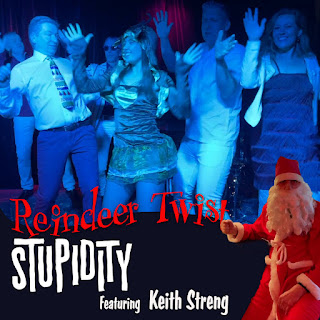 Sweden's Stupidity featuring Keith Streng have released new Christmas song for this year. "Reindeer Twist" has that old time rock and roll sound you would expect with song with "twist" in the title, but it has a surprisingly dark feel. It's the kind of vintage rock and roll song you'd hear in a Quentin Tarantino or David Lynch movie that hasn't been made yet. That doesn't mean there isn't the needed sense of joy from a Christmas song, but this is just an oddly groovy but dark version of that joy and wonder.

"The song came from a crazy dream I had after watching a program about reindeers in Lappland, north Sweden where they live. In my dream they could talk and dance, so I added the twist and Santa and Christmas seemed pretty natural here too."

You can watch the video for "Reindeer Twist" below. The song is available as a single via Red On Red Records, and can be downloaded through Bandcamp.