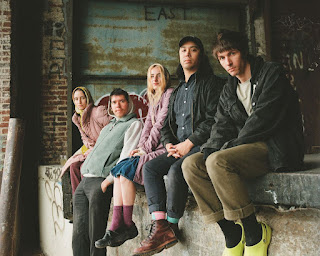 Brooklyn's Foyer Red have released a single that is sweet and almost twee indie rock, but has far too much of an edge to ever truly be twee. "Etc" is a bouncy and happy song that has a barely concealed ferocity lying just beneath the surface. The song feels like it could explode at any second, but it just never does. It's kind of like the musical equivalent of when someone is speaking nicely to you even though you know they're steaming mad. Despite that, "Etc" is filled with lovely harmonies and guitar that makes the song fun still.

"My character in 'Etc' finds themselves in a dysfunctional relationship in which gender informs internal struggles of power and control. Instead of addressing the problem they state it plainly while asking vague and broad questions about the nature of the world. Rather than seeking a new system they find ways to play into that system to ultimately get what they want in the short-term. Echoing the stark sonic changes in the song, Mitch’s character is on a different page entirely. Taking a note from Algorithms to Live By: The Computer Science of Human Decisions, they are fixated on the optimal stopping problems, seeking to maximize the reward of a great parking space and minimize the cost of distance from the front doors and time spent circling around holding out for a better spot. The syllables are so stiff and stressed at unnatural points in the last verse to exemplify how mechanical the whole process has been, where the character is in their head crunching data to guarantee satisfaction with the outcome."

You can watch the video for "Etc" below. The song is available as a single via Carpark Records. More more on Foyer Red, check out the band's Facebook and Twitter.