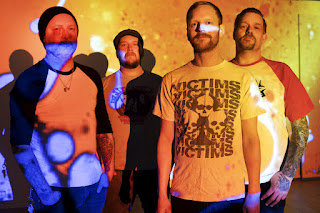 When I'm writing about a band, I like to have a unique perspective on them and not just mirror what is written in their press release or in pull quotes from other publications. But, as I was listening to the latest single from Sweden's Sweet Teeth, I kept thinking it sounded like Husker Du meets Dinosaur Jr. Reading their press release after, they kept being compared to both of those bands. Sometimes you just can't avoid what everyone else is saying. "No Me" just has that gruff but kinda poppy early alternative punk rock of both Husker Du and Dinosaur Jr. Plus it includes a guitar solo that just sounds like a J Mascis solo, and singer Andreas Axelson has more than a little of a Bob Mould thing going on in his vocals. Of course, if you're going to sound like other bands you could do a lot worse than Husker Du and Dinosaur Jr.

"’No me’ was, if we remember correctly, the second song we ever wrote and you can sort of hear that. It is by far the most Hüsker Dü- inspired verse we’ve ever done, and in the beginning we were almost all about the Dü! Lyrically, it handles the most overtly punk stance you can have, namely ”I don’t care what anyone thinks about me and I’ll do what the f* I want”. Childish? Well maybe.. but does it ever get old? Never! The title comes from my nephew Bill, who said ’No me’ when he was angry…anyway, hope you enjoy it!"

You can listen to "No Me" below. High Anxiety is due out in the Fall on Lovely Records. For more on Sweet Teeth, check out the band on Facebook and Instagram.