Mamalarky - "You Know I Know" 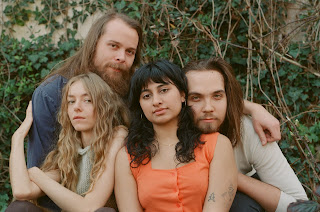 It's been a little while since we've heard from Mamalarky. On their new single, the band keeps a little bit more of the psychedelia meets R&B sound they had on "Will I See U?," last year's collaboration with Benet. "You Know I Know" is a little but more pop than the previous single, and goes towards psychedelic pop. There is still enough noise in here for indie rock fans, particularly in the clangy guitar. Yeah, that's right, Mamalarky makes guitars clang in a pop song. It's a truly unique sound coming from a band that's starting to be known for surprising us over their short two year span of being a band.

"'You Know I Know' was never supposed to come out, but my bandmates told me it would make for a great single. I accidentally wrote a rock banger that sounded like it could have come out in 2007, like MGMT meets Weezer meets Sheryl Crow. "The song is about growing up in Texas and having really overwhelming dreams of playing music and takin' it on the road. Having those dreams come to fruition recently has been exciting and has further grounded me in appreciating how much Texas, and Austin specifically, gave us the proper nutrients to do what we're doing now."It's also a bit about, ya know, death and impermanence. Having all your accomplishments and high notes framed by mortality is a good way to make sure you're taking it all in."

You can watch the video for "You Know I Know" below. The song is available now as a single via Fire Talk Records. For more on Mamalarky, check out the band's website. Upcoming tour dates are below the video.