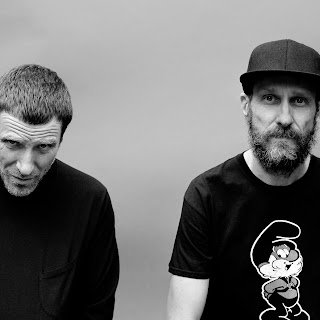 Even though I knew it was coming, when Sleaford Mods cancelled their September 2020 show at The Sinclair, it was devastating. Not only was it my last cancelled show in a long, long series of cancelled shows, Sleaford Mods never come to Boston. I think they played Great Scott once, but that was many years ago. When they finally announced a return to the States and a show back at The Sinclair, of course if was a night that wouldn't work for me. At the very last minute, my plans changed and a sold out show suddenly had tickets available. I was finally going to get to see Sleaford Mods.

And what a show. I've watched a ton of live performances of theirs and their documentary Bunch of Kunst, and I was still unprepared for Sleaford Mods live. Jason Williamson is a captivating performer and a true rock star. You can't help but watch him as he stalks the stage moving between being the best punk rock frontman you've ever seen and preening around like this generation's Mick Jagger. Every video I've seen shows laptop controller Andrew Fearn standing by his laptop with a hand in his pocket and a drink in the other, lightly bopping to the music. I'm going to assume he's sober, since there was no beer in sight Friday night. Instead Fearn did Punk Rock Aerobics for the entirely of their ninety minute set. The energy level was insane, and after pogoing for half a song and wearing out my calves, I was quite jealous.

One thing I wondered was how they would pull off a hit song like "Mork n Mindy." That song features vocals from Billy Nomates, and I doubted they'd have a second vocalist just for one song. They played it, and her vocals just played on the laptop, because of course they did.

Sleaford Mods also included their cover of Yazoo's "Don't Go," and ended with the one-two punch of "Jobseeker" and "Tweet Tweet Tweet." Once that was done, Fearns unplugged his laptop and they walked off the stage. No encore, and none was needed after ninety minutes. It was the most punk rock show I've seen in years.

A couple of notes: Two years into a pandemic, and those spit droplets that come out of Williamson's mouth as he vocalizes are less punk rock cool and more foreboding. Also, the crowd skewed much older and laid back than I expected. t was more of an NPR crowd than a punk rock one. One audience member seemed shocked by their liberal use of c-bombs, and others seemed horrified when the crowd got slightly rowdy in their dancing.

Since I bought a ticket a few hours before the show, I didn't have time to research the opening band, Sorry. This was the first time that's happened in years, and it was a fun throwback experience. Sorry plays a darker version of the more pop oriented indie rock that's all the rage right now. It was definitely not what I expected opening for Sleaford Mods, both genre-wise and energy level. They were much more laid back than the headliner, but they won over a good majority of the crowd by the end of their set. We'll be revisiting them sooner than later, hopefully!