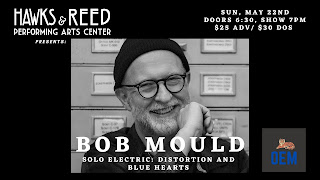 Bob Mould and J. Robbins are both legendary punk rockers who have been doing solo work as of late. The two are currently on a tour together showing the different ways punk rockers can go solo in different styles. Sunday night they came to Hawks and Reed Performing Arts Center, and I could not resist checking it out.

First of all, I have to say that I love how fantastic music venues are popping up in cities and towns not really known as huge music hubs. Places like Hawks and Reed and NOVA Arts in Keene are great alternatives to every concert being in Boston or Providence. Not dealing with traffic and having plenty of parking is never a bad thing, and these venues are first class and not just a PA in the corner of a rec center.

I'm much less familiar with J. Robbins, either as a solo artist or with Jawbox. (I know, I know... I need to listen to Jawbox more.) Robbins is doing the more traditional punk goes solo thing. His set was seated with an acoustic guitar. He even brought along cellist Gordon Withers for the tour. The cello was a great addition, adding some intensity to the music. Odd that a cello adds some punk to a show, but here we are! Robbins had a great set mostly taken from his 2019 album Un-becoming. I'll have to fall down a Jawbox/J. Robbins rabbit hole this week.

I've seen Bob Mould as Bob Mould Band before, but never solo. Turns out there's not truly a difference between the two. Instead of a more traditional solo show on acoustic guitar, Mould attacked his electric guitar like he had a full backing band. His songs don't lose any intensity with just him, and he certainly isn't playing them in a more relaxed manner. Mould got just as sweaty and his glasses just as foggy as any full band show you've ever seen. He bounced around the stage so much his microphone was swaying along with him. He made full use of the stage, stalking it and moving around the full area when he wasn't singing. Not only were Husker Du classics like "I Apologize" and the show closing "Something I Learned Today" highlights, but a newer song like "Siberian Butterfly" off 2020's Blue Hearts held right up with his classics. No matter what form Bob Mould takes next tour, be sure to get out to see him.