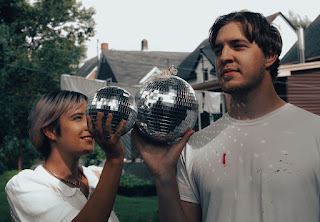 Hailing from Corner Brook, Newfoundland and Labrador, Bus People have just released their debut single. "Luck" is a lo-fi keyboard jam. It's one of the best examples of modern bedroom indie pop around these days. It's a weird little song that is going to win you over with nothing more than pure charm. "Luck" most likely personifies the description of twee, but I hesitate to call it that because it seems like Bus People are a little more than twee (as much as we adore twee around here). I might stick with that, but the song does erupt into a more standard indie rock ending, which is what helps elevate this song to being spectacular.

Aley Waterman and Scott Sheppard (aka Bus People) say of their new single:

"Our debut single, 'Luck,' was inspired by a nostalgia for being a young teenager in a small town. The conflicts of the time felt so simple when looking back through the lens of adulthood.

"There’s a calm narrative throughout the verses but we wanted to capture an unhinged energy in the choruses that really reflects a desire to go back to the innocence of youth when that concept becomes an impossibility."

You can watch the video for "Luck" below. For more on Bus People, check out the band on Bandcamp and Instagram.