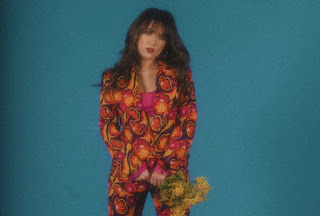 Scotland's Rianne Downey makes music that would normally be a little too pop for my personal taste, but she just does it in a way that works for me. Her latest single, "Home," is poppy as hell, but not in that dance/Top 40 way. It's more of a pop take on a singer/songwriter song combined with soul. Plus, Downey just has one of those voices you're drawn too. It's great, but not in a completely traditional way. It just packs so much charm that it's impossible to resist. This song in particular is reminding me a lot of Carsie Blanton, which is never a bad thing around here.

“I wrote ‘Home’ when I was still wondering whether I was going to stay or go. I always wanted to look to and travel over the horizon. Although I love Scotland, being from a small place can make people afraid to venture into the big wide world. That’s great for anyone that can settle, but it was never for me.”

You can watch the video for "Home" below. Come What May is due out in January 2023 on Run On Records. For more on Rianne Downey, check out the artist on Twitter and Facebook.

Email ThisBlogThis!Share to TwitterShare to FacebookShare to Pinterest
Labels: come what may, home, Ken Sears, rianne downey, run on records