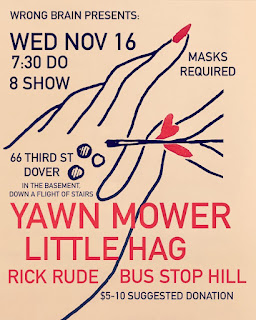 I've been a fan of Little Hag ever since stumbling on their music back when Avery Mandeville was still playing under her name. One frustrating thing about running a music blog is discovering musicians I really like in other areas that never make it to the Boston/New England area. Luckily, Little Hag teamed up with Yawn Mower for a short tour of New England. Dover, NH is a little outside of the distance I normally travel for shows, but it's better than the drive down to Asbury Park so I couldn't resist.

Little Hag opened up the show with a fairly short set. Opening with "Tetris" was perfect and set the mood for the night. Mandeville pours everything she has into her performances and might be one of the most energetic performers I've seen in years. The rest of the set drew from 2021's excellent Leash, including favorites like "Red," "Blood," and "Schlub." Wrong Brain's set up provided for a unique stage set up. Surrounded by artwork including what might have been a large pink pinata on the side of the stage and multiple ghosts hanging from the ceiling, drummer Owen Flanagan was set up in the center of his four bandmates. Little Hag were a blast of pure indie rock and pop fun, and let's hope they make it up to New England more regularly.

Yawn Mower was up next. The band shares a bass player with Little Hag (Dana Yurcisin), and have a similar aesthetic. They also played a relatively quick set, focusing on their just released album To Each Their Own Coat. It's filled with fun, quirky indie rock songs. "Elevation" is my personal favorite from the album, so it was two bands in a row that opened with my favorite song. While a lot of indie rock tends to be very serious and important, Yawn Mower are just pure upbeat fun. They even included a cover of They Might Be Giant's "Dr. Worm," and more bands should really cover They Might Be Giants.

Rick Rude were supposed to close out the night, but seeing as four of five members were sick, it ended up being a solo set by bass player Jordan Holtz. You don't normally get a solo performance by a bass player, so it was an interesting set. I mean that in a good way, as Katz was a captivating performer. Rick Rude is one of those bands I'm not terribly familiar with, although they seem to play around constantly. If Holtz's performance was any indication, I need to get out to see a Rick Rude show as soon as everyone gets better.