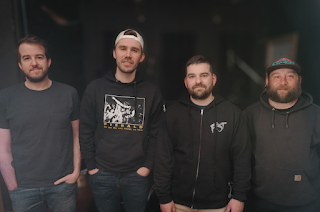 Back in June we brought you "Maybe You Were Right About Me" from American Thrills, calling it "rough around the edges" and "just shy of emo or pop punk." Now the Connecticut band is back with "Ego Death," which fits right in with that description. It's still an incredibly catchy song that is just an anthem waiting to happen. It's really like if Bruce Springsteen had been transformed after trying to write a song for the Ramones but then time travelled and was inspired by Jade Tree Records in the late 90's. The dichotomy of how abrasive parts of this song are while still being this catchy is what makes "Ego Death" so appealing.

The band says of the new single:

"We reached out to Scott Stapp on multiple platforms and he refused to sing on this track. Dude is a poser. We will be spitefully playing Creed songs at Fest later this month. Be there or be square."

You can listen to "Ego Death" below. Parted Ways is out November 18 on Wiretap Records. For more on American Thrills, check out the band's website.