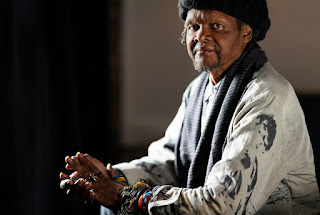 Lonney Holley is a musician, writer, and artist out of Birmingham, Alabama. His story alone is worth paying attention to, but the acclaimed creator began making music in 2006, and he has a new record out via Jagjaguar this spring. We are excited to share a pre-release track from this album today, the song "Oh Me, Oh My," featuring backing vocals by former R.E.M. frontman and lyricist Michael Stipe. According to the label:

Oh Me Oh My features both kinetic, shortwave funk that calls to mind Brian Eno’s My Life in the Bush of Ghosts and the deep space satellite sounds of Eno’s ambient works. There are also elements of Laurie Anderson’s meditations, elements of Gil Scott-Heron’s profound longform soul, elements of John Lurie’s grabbag jazz, and yes, elements of Sun Ra’s bold afrofuturism. But Oh Me Oh My is a triumphant sonic achievement of its own.

The title track itself, posted below, is haunting while still feeling bright and relevatory. Stipe's vocals set up a foundation for Holley's voice to rest upon and allow his lyrics room to grow and be present. The instrumentation is similarly haunting; while the Eno comparison is more than valid, my mind went to R.E.M.'s Up with the ethereal drone beneath the piano and bass. It's a compelling listen that grew on me on repeat listens, and one that stuck with me long after it was through.

Lonney Holley's new album, Oh Me Oh My, is out on March 10 on Jagjaguar. It's produced by Jackknife Lee (R.E.M., Snow Patrol, Bloc Party), and features contributions from a range of artists including Moor Mother, Bon Iver, and Sharon Van Etten. You can visit Holley's website and check out "Oh Me, Oh My" below.