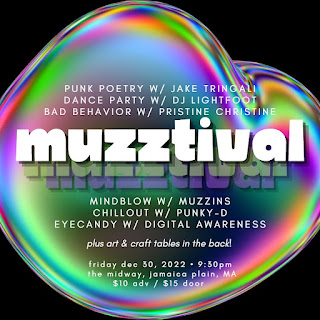 This seemed to be the year that most cool events were happening before (or early) on New Year's Eve. Possibly the coolest was Muzztival. Hosted by Muzzins, the event took place the night before New Year's Eve and featured a wide variety of entertainment besides bands. The evening featured punk poetry, DJ Lightfoot, a drag performance, and an arts and crafts table in the back of Midway Cafe. Of course, the main event was the performance by Muzzins.

Despite having just two singles out, Muzzins are quietly one of the buzziest bands in Boston currently. From the first time I saw them opening for Snapped Ankles way back in March, the band has just gotten better and more engaging. One of the main reasons is just how impossible they are to categorize. Their music is a combination of hip hop, electronic, punk, jazz, indie rock... and just about everything else you can imagine. They are truly a captivating performance, led by singer Rayna Jhaveri. Jhaveri just owns the stage when Muzzins perform. It's a perfect mixture of rock star swagger with awkward nerd that shouldn't work, but does.

The true key with seeing Muzzins is to let yourself free and truly participate. This is not music or a live experience you simply watch and clap in between. Audience members who let themselves loose to dance (particularly if they don't normally find themselves dancing) are going to enjoy the night much more. In the Boston indie scene, dancing is typically frowned upon, but Muzzins seem determined to change that. A song about smoking weed and listening to jazz in theory should be listened to more than experienced, but with Muzzins you need to throw yourself into the experience without any qualms or self-consciousness.

Apologies to performers after Muzzins. I had to miss them due to pure exhaustion and a long drive home. Next time...