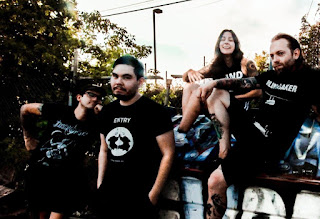 Denver's FAIM formed back in 2017, and are all set to release their final album. The political punk rockers have released a single off the album, "Opus." It's a wonderfully loud and thrash filled hardcore song that keeps just barely enough melody to keep the whole thing interesting. This is much heavier than the normal punk rock we bring you, but there's just something about "Opus" that's irresistible. It could be that this isn't your standard style of hardcore. In all of the aggression, there is a sense of post hardcore and some sustenance beyond the screaming. Even if the initial burst pushes you away, I urge you to stick it out and give the full song a chance. After the breakdown could just be the clouds breaking moment you need to fully get into FAIM.

Vocalist Kat says of the upcoming album and her band's break up:

"When I moved to Washington State, we knew we couldn’t keep going with the band indefinitely. Being older, we really wanted to spend our time off work not just touring, and this band had started taking a lot of that personal time away. Putting an end date on the band has allowed us to give 100% to this band in a specific time frame. Plus, we know this is a scene for the youth, and we didn’t want to overstay our welcome. “Opus” is about all of this. Did I make smart life choices? Can I let go of something that has been an integral part of my life for the past 6 years? Was it all a waste of time?

"It’s bittersweet saying goodbye to this band. I am grateful for the opportunities and friendships that have come out of it, but I am also ready to move on."

You can listen to "Opus" below. Your Life and Nothing Else is due out March 3 on Safe Inside Records. The album can be pre-ordered via Bandcamp. For more on FAIM, check out the band's website. Upcoming tour dates are below the song with more to come soon.

January 13 - Portland, OR at Mano Oculta

January 14 - Vancouver, BC at the Red Gate

Email ThisBlogThis!Share to TwitterShare to FacebookShare to Pinterest
Labels: faim, Ken Sears, opus, safe inside records, your life and nothing else