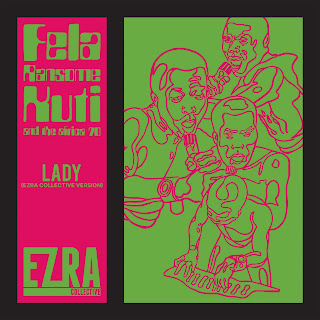 Fela Kuti is one of those artists I'm embarrassingly unfamiliar with. Ezra Collective might help change a lot of that with their new single, an instrumental cover of Kuti's "Lady." This is a thrilling Afrobeat/jazz track that will be perfect for fans of Ezra Collective and fits right in with their November 2022 album Where I'm Meant to Be. It's the type of high energy that we don't normally associate with jazz, but we really should. Ezra Collective take the bones of the original and inject it with their own energy. It's also the perfect reminder that we need to start getting into Fela Kuti, since we don't have any good excuses not to at this point in our lives.

Bandleader Demi Koleoso says of the cover and original:

"When I was a child my Dad had a collection of Fela Kuti CDs he would play in the car; at the time I didn’t know who what it was, but I always knew it was my favourite music to listen to. Fast forward two decades and nothing’s changed - Fela remains my musical hero and a foundational inspiration for Ezra Collective.  From our very first gig we’ve been playing tribute to his music.  To now be able to celebrate his legacy on a vinyl is a dream come true.  Thank you to Kinetika Bloco for being a part of the horn section.  The original remains unbeatable, but I hope this remix makes you dance as well.”

You can listen to Ezra Collective's version of "Lady" below. It will be out physically on yellow 7" vinyl on January 13 with another Fela Kuti cover: "Shakara." Also out on Friday is a reissue of Fela Kuti's album Shakara. For more on Ezra Collective, check out their website.