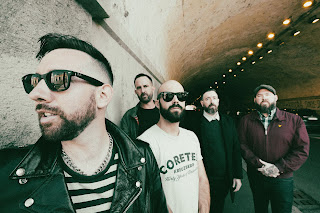 Even though we just had an album from Celtics punks The Rumjacks back in February, they're already back with new music! "Whitecaps" leans much more on the punk side of things than the Celtic side. In fact, there are only a few Celtic flourishes used sparsely in the song. If we're going to compare all Celtic punk bands to Dropkick Murphys (and we probably are), "Whitecaps" is much more along the lines of "Skinhead on the MBTA" and "Pipebomb on Lansdowne" than "Rose Tattoo" or "Shipping Up to Boston." This is just the pure aggression of gang vocals and heavy punk guitars.

"The song is vaguely about the rise of far right nationalist movements. White caps meaning rough waters due to high wind… But also could be interpreted as KKK hoods. It just means something big and bad is coming politically. I wrote it based on seeing swastikas all over Eastern Europe. As a Jew, it rattles you to the core to know people want you to not exist."

You can watch the video for "Whitecaps" below. The song will be available on a six song split EP with Flatfoot 56 which is due out May 6. For more on The Rumjacks, check out the band's website.