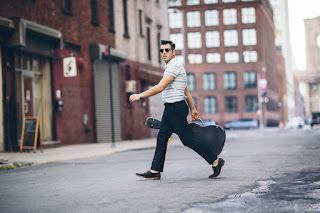 While the latest single from Eli Paperboy Reed's upcoming album of Merle Haggard covers is a Merle Haggard original, it's actually a cover of an unreleased cover. I'll let Reed explain:

“In 1969, Capitol Records commissioned a duet version of this song from Buck Owens, who was their biggest country star, and Bettye Swann, who was their most successful soul singer. The label ultimately shelved it out of fears that an interracial collaboration would damage Buck’s career, but a few of the acetates eventually leaked out, and I happen to own one of them."When I decided to record an album of Merle Haggard songs I knew that wanted to pay homage to this version. I called Sabine and explained the story and my vision for resurrecting the long lost duet and she was thrilled to step into Swann’s shoes and helped deliver an unforgettable—and long overdue—rendition."It’s probably the most straight ahead interpretation on the album, and that’s the way I wanted it. The arrangement was good enough to be released back in 1969, but it never had a chance to get the respect it deserved. To finally, officially put that song out as a duet with a woman of color after all these years feels incredibly consequential to me. Thanks so much to Sabine for helping me realize the vision!”

Compared to the other two previously released singles ("I'm Bringing Home Good News" and "Mama Tried"), "Today I Started Loving You Again" is the most country sounding. It still has plenty of that neo-soul feel to it that we associate with Reed, but it leans more into classic country territory. Plus, collaborating with Sabine McCalla is an absolute dream. As excited as I am for this album, it has me secretly wishing for a collaborative album between Reed and McCalla. Their voices seem perfectly made to sing together.

You can listen to Eli Paperboy Reed and Sabine McCalla's version of "Today I Started Loving You Again" below. Down Every Road is due out April 29 on Yep Roc Records, and can be pre-ordered here. For more on Eli Paperboy Reed, check out the artist's website.