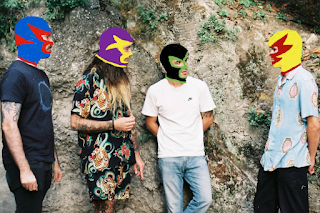 Jaguero are an Italian band made up of old acquaintances that just happen to have been in Slander, Regarde, and La Fortuna. Their new single, "Mild Safari," is a punk song made up of interesting elements. One of the first things you'll notice is a 90's buzzsaw guitar crunching its way throughout the song. The next thing that stands out is how catchy it is. "Mild Safari" stops just shy of being pop punk while still heavily leaning deep into pop hooks. Jaguero condense throwback elements of old school pop punk and 90's guitar while sounding perfectly current.

Jaguero says of their new song:

"'Mild Safari' dives deep into the end of a relationship, caused by an upcoming departure. Collectively processing the whole thing over a messed up week-end, the only solution seems to be to embrace all the emotions and actually appreciate what we had. Just speak your mind in a pure way, and move on towards new horizons."

You can listen to "Mild Safari" below. Jaguero has a debut EP coming out in April on Epidemic Records. For more on the band, check out their Facebook and Instagram.