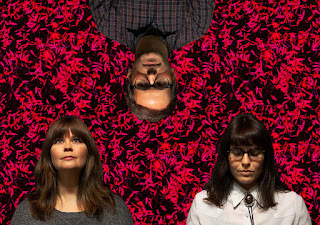 Rip Room's previous single combined a punch of punk sounds into one new but familiar cohesive punk sound, and their new one continues that, but with different sounds. "Worth Repeating" sounds like early, noisier The Dismemberment Plan with the bass groove of Geffen-era Sonic Youth, the intensity and out of control feeling of Rites of Spring, and the thrash of Bay area metal. "Worth Repeating" is an intense song that is going to sound gloriously familiar to some of us while still plowing straight at you at near top speed. This is intense, disjointed punk that is still an enjoyable listen.

"Shot in the midst of the pandemic, we found ourselves in a clandestine location with a rough plan and more than a few worries. The song is about the world falling apart, so it felt right to shoot in the woods — ominous and sinister, but maybe the safest place to be. By the end of a long evening, our director (and dear friend Josh Johnson) had captured the weird energy that had been following us the past year and, in retrospect, shooting the video provided some much-needed momentum during a dark time.”

You can watch the video for "Worth Repeating" below. Alight and Resound is due out May 27 on Spartan Records, and can be pre-ordered here. For more on Rip Room, check out the band's website.