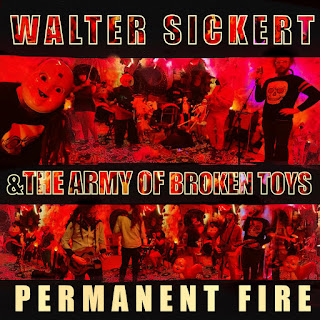 February is the worst month of the year. Everyone is sick of the cold and snow, and everything is starting to get that gross late winter sludge on it. Even when the snow melts, it just makes the world muddy, and we can't even start to consider Spring being near yet. The one good thing about February is the RPM Challenge, where bands write and record a full album during the month of February. The highlight of that lately has been Walter Sickert & The Army of Broken Toys' contribution!

This year's RPM Challenge album is Permanent Fire, and is their seventeenth overall(!). This is a much more scaled down sound than we're used to from Walter Sickert & The Army of Broken Toys, but I hesitate to called it stripped down or sparse. The production on the album is unbelievable, especially when you consider how quickly everything had to come together to make it. Calling the album Permanent Fire expressly lays out the theme of the album. This sure sounds like a reaction to the world being on fire with no true end in sight. The feeling of dread is thick on Sickert's vocals, and I always hate to say music sounds haunting, so maybe we'll go with Permanent Fire being haunted. The album also shows Sickert experimenting with vocal effects and loops. "In Time" starts off with a swirl of noise before keeping the same slow, melancholy vibe until it descends into a madness of loops and effects. After that, the mood seems to lighten a little bit with the almost party jam (albeit quite downbeat) of "What a World" and the kinda sorta punk folk of "Dance 'til We Skinless." Of course, my entire description is thrown out by the chaotic fury of "Explode Rainbows." I can't wait to see that one performed live.

Of course, I could just let the band explain the album, as they do on their Bandcamp page:

"The songs were created with stream-of-consciousness and improvisational one-take recordings then mutated in the WIREFOREST mind-grapes of composer/band leader Walter Alice Sickert."

You can listen to "Dance 'til We Skinless" below. Permanent Fire is out now and is available for the "name your price" option through Bandcamp. If you choose free, be sure to give Walter Sickert & The Army of Broken Toys a follow on Facebook and Twitter.