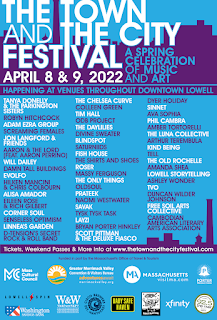 I've wanted to go to The Town and The City Festival ever since the very first one was announced, but it had never quite worked out. When the line up was announced for October 2021, I could finally go... and then it was postponed. Luckily I was able to make it to the Saturday edition, but had to miss artists like Tanya Donelly & The Parkington Sisters, The Old Rochelle, Hilken Mancini and Chris Colburn, the live debut of Aaron & The Lord, and more. The two shows I caught on Saturday were fairly epic, though.

My evening started off at The Worthen Attic, which was basically the second floor of a pub. It's the kind of place where the stage is just an area in the corner of the room on the floor behind a post, but these places have their very own charm. First up was Lowell's own Tysk Tysk Task. Even though I've been a rabid fan for a few years now, and they're very local, seeing them live has just never worked out before. Playing as a duo with Samantha Hartsel on vocals and guitar and Danni Gannon on drums. This version of Tysk Tysk Task was loud. Like... really loud. Piercing through your earplugs loud. Hartsel and Gannon played together much more tightly than I would have expected, but Tysk Tysk Task has always had this cool, loose, and somewhat improvised feel, so tight can be fairly subjective. A song like the newly released "Colors" needs to be heard live in all of its giant magnificence. Tysk Tysk Task started their set a little early and played through their set more quickly than expected, so we got a few bonus songs at the end. This included their alt-folk song, "Lovers' Covers," which is their big Spotify hit.

Next up at The Worthen was SAVAK out of Brooklyn. They were the big draw of this grouping of bands, but the one I was least familiar with. SAVAK played a quickie set using Tysk Tysk Task's drum kit since they had another show in Boston later that night. They didn't even have time to set up their merch, and just told the audience to follow them out to their van to buy anything. This led to a laid back, fun set of catchy alt-rock songs. Their blend of poppy songs has a strong 90's power pop vibe, and the crowd was there for it. Although a song like "No Blues No Jazz" had a strong avant vibe that melded with their pop hooks quite well.

Last up for The Worthen was Colleen Green, who recently came back home to the area. She was debuting a new set called "Colleen Green's Lo-fi Hits," which was a career spanning selection of songs in chronological order. Playing live guitar and singing over a backing track from a tablet (you know, exactly what Colleen Green does), she played all of her hits like "Only One" from 2013's Sock it to Me and "TV" from 2015's I Want to Grow Up. It's the perfect set for long term fans and people just looking for an introduction to Green. I just wish it was a little longer.

Next up was the brand new venue Taffeta, which is part of Western Ave Studios. I know what to expect with a music venue attached to artist spaces, but Taffeta is not that. It's a killer actual music venue, with an actual stage and light system. The venue sounded amazing and was really nice without being overly upscale. I'm really hoping to get back here as much as possible.

Philadelphia's TVO played at Taffeta first. They play that dirty, kinda trashy and unhinged rock 'n' roll meets punk sound I can never seem to get enough of. The band played that perfect mix of tight and loose, but there seemed to be an audio issue with the microphone. It was low enough that I was wondering if his microphone was on and I was just close enough to the stage to hear him a little without it, but when he spoke it was a normal level. Not sure if it was by design, but it kept me distracted, which is a shame since the band played great and had killer energy.

Next up was Boston's Linnea's Garden. They're the rare band that Jeff and I are equally into. As much fun as their blend of dance punk is on record, live they are an absolute treat. Songs like "No Bra" and "Like the Patriarchy" are such fun in person. Linnea Herzog is such a magnetic frontperson, and has that perfect mixture of energy and charisma without seeming forced. I got the feeling that the Screaming Females fans filling Taffeta didn't quite know what to make of them at first, but they converted many to fans by the end of their set. This was only my first time seeing them in person, and now that I have I can guarantee it won't be the last.

Last up was Screaming Females. The New Jersey punk legends were the big draw of the night, and the audience crowded right to the stage as soon as Linnea's Garden ended. Their set seemed to focus on their newer songs, but when their as good as 2018's "I'll Make You Sorry," literally no one can complain. They did go back on occasion, like with 2010's epic noise jam "A New Kid." As with any Screaming Females show, the highlight is Marissa Paternoster's guitar playing. As epic as her soloing might get, at no point does it ever get showy. Even when she walks to the front of the stage for a solo, it's more like a guitar assassin than a Van Halen style showboat. Even their encore was a no nonsense one song encore. If you've seen them before you know how vital their live show is. If you haven't, you simply need to make the time.