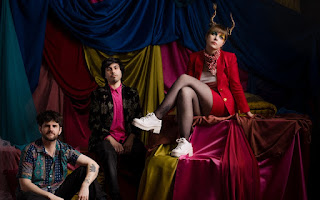 I first discovered Guerilla Toss way back in 2015 when they opened for Mission of Burma in Portsmouth, NH. I hadn't really been able to get into their albums before seeing them live, but their live show hooked me as a fan. Guerilla Toss had this bizarro noisy funk party band dynamic that worked for me. Despite that being seven years ago, and them touring consistently, I hadn't seen them since. So obviously when a Wednesday night in Providence worked out for me, I had to make the trek down.

Muggs Fogarty opened the show. Last year's Eventual Party didn't quite work for me personally. It was a little too pop for my snobby tastes. I recognized it was good, but just not for me. Live is a completely different story. Muggs Fogarty opened her set sitting on the floor and looping vocals over and over to create a soundscape to perform spoken word over. From little singing snippets to beatboxing, the entire backing track was created right there. Oddly compelling stuff. From there most of the performance was Fogarty singing solo over a musical track, but they are a compelling performer live. In particular was a cover of Hole's "Violet" that was partially performed with loops recorded on stage. The grunge classic was completely reimagined as a laid back, near trip hop song. I'm looking forward to checking out what Fogarty does next.

The Columbus Theater seemed like an odd venue for Guerilla Toss. It's a seated theater, and I have always thought of Guerilla Toss as a standing band. The band agreed and encouraged the crowd to stand up for their performance, which the majority of the crowd agreed to. I can't imagine seeing them while in a chair, as the energy they put out with their music needs to be matched. As their sound has evolved to a more dance friendly sound, their live shows are still a wild celebration of life and music. Songs like "Betty Dreams of Green Men" and "I Got Spirit" were fabulous live. Vocalist Kassie Karlson might not throw herself around the stage quite like she did back in 2015, but that doesn't mean the performance is any less energetic. Guerilla Toss make the kind of music it's impossible to sit still during, but is impossible to truly dance to. The audience just did something resembling a dance, which was perfect. Closing with a futuristic disco reimagining of The Velvet Underground's "All Tomorrow's Parties," Guerilla Toss cemented themselves as the house band of the apocalypse, if the apocalypse ends up being something to celebrate.