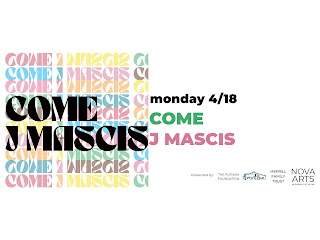 Nova Arts is a fairly new music venue in Keene, NH that seems to mostly be a coffee shop/cafe and arts space. At first they were booking smaller, more local artists, but recently they started booking larger bands from the area and some national artists. I've been trying to check it out for a while, and once I saw a double bill of J Mascis and Come, I knew it was finally time to make the trip to New Hampshire.

This was the kind of double bill that could have gone either way for the headliner. J Mascis went on first. I was a little nervous as to how his set would go since Mascis can play quite loudly even as a solo artist. I've been to Dinosaur Jr shows at more established venues that couldn't handle the volume Mascis can dish out, but Nova Arts was more than up to the task. (Turns out it's a killer venue with a huge stage and lights and sound far better than I could have expected!) There were some sound issues, but those cleared up after Mascis' wife ran out to their car to grab a different amp as his wasn't working right. Throughout his hour long set, Mascis played both solo material and Dinosaur Jr favorites. Although he used two acoustic guitars, the performance was hardly acoustic. Multiple effects pedals were used for blistering, feedback laden solos, along with ample looping amps as Mascis laid down a guitar track to play over. I've seen Mascis play solo multiple times, and this may have been the loudest. Plus, it was the first time in a long, long time I've been able to be close enough to really watch him play, and that's always a treat.

Despite Chris Brokaw and Thalia Zedek being in Come, they're one of those bands I'm not all that familiar with. I'll listen to them every so often, and always decide I should listen more. This was my first time seeing them, and hopefully it won't be the last. Come just plays pure classic and loud early indie rock. They are legends of the Boston indie rock scene for a reason and proved it in Keene. The loudest moments of Mascis' set were just a preparation for Come, but as loud and abrasive as they were, there was also a lot of beauty in their music. Being abrasive and lovely is a thing most bands can't pull off, but Come are masters of it. As much as I love Brokaw's solo work, there was something purely magical about Zedek and Brokaw's guitars blending together. My only regret is not seeing them before now.