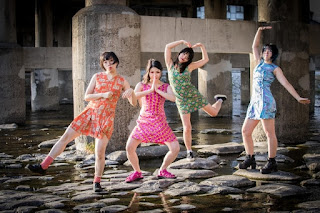 Japanese punk quartet Otoboke Beaver have released a new single off their upcoming album. "YAKITORI" starts off as a fun little upbeat song. It's cheery and fairly fun, and then the song just launches off into an absolute fury. It's filled with screaming and plenty of abrasive sounds while never quite losing that original upbeat cheer. Plus, they even throw in some metal guitar licks. Otoboke Beaver throw themselves to complete extremes in this one, and somehow cram this all into an under two minute run time. This kind of mocking punk is my favorite kind of punk out there, and "YAKITORI" do it to perfection.

“We are not popular in Japan, but we have been told by some Japanese people that we are flirting with foreigners. I was so pissed off by this that I decided to write songs with ‘Japanese’ and ‘foreign flirtatious’ titles, such as ‘SUSHI’ and ‘YAKITORI.’ It’s a meaningless song, ‘I’m the one who threw yakitori in your mailbox.’ Not so flirtatious, right?”

You can watch the video for "YAKITORI" below. Super Champion is due out May 6 on Damnably, and can be pre-ordered/pre-saved here. For more on Otoboke Beaver, check out the band's website. Upcoming tour dates are below the song.