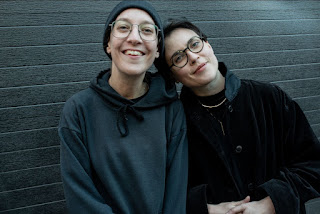 Over the past few years, we've seen Partner seemingly go back in time. When we first discovered them, they were putting out some killer 90's inspired alt-rock jams. They've played around with their sound quite a bit, going back to the 70's for some classic rock/prog rock tunes. Now, they're dancing the line between the 70's and 80's with "Not Today." This new song is a straight up power ballad. This is going to remind you of your favorite vintage power ballads. While it's a huge song, it never quite gets to the level of excess of Bon Jovi or Motley Crue, but it peeks over and looks at those songs lovingly. Partner have been making songs for music snobs to forget their snobbery and just have fun rocking out to, and "Not Today" is no exception.

In a press release, Partner say of their new song:

"This is a song we composed in November 2020 when we were self isolating and writing on Gabriola Island at the Noise Floor. We had a series of early morning writing sessions that began at 7 am and produced this and several other songs. At the time we were not sure when we would play a show again, and it would turn out not to be for almost a year, but we were grateful to get a chance to rock out in the woods. Maybe because we were missing playing shows, some of the songs ended up sounding very arena rock. We can't wait to take this one on the road."

You can watch the video for "Not Today" below. For more on Partner, check out the band's website.