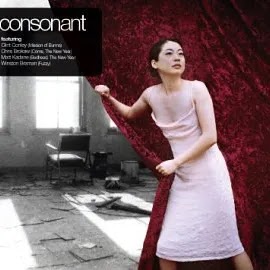 I think it's been a little over a year since I've done a Forgotten Friday, but recently I re-discovered Consonant, and I simply couldn't resist bringing them back to all of our attentions. We throw the term "supergroup" around quite liberally here, but check out the line-up for Consonant. Formed in 2001, this marked Clint Conley's return to making music since the dissolution of Mission of Burma in 1983. Also included is Chris Brokaw (Come, The Lemonheads), Winston Braman (Fuzzy), and Matt Kadane (Bedhead). That pedigree alone should get Consonant a lot more attention, not to mention that this helped inspire Mission of Burma's brilliant reunion between 2002 and 2020.

But how is the music? Consonant might not be as aggressive of experimental as Burma, but if you like Burma (or really any of the band's the members have been in), you're going to like this. The band released a self-titled debut album in 2002 and Love and Affliction in 2003. I remember being surprised at how pop they sounded in comparison, but listening now this is hardly pop. A song like "Who Touches You Now?" is simply epic, and "John Coltrane's 'My Favorite Things'" is a disjointed take on dream pop. Consonant aren't a mainstream or pop version of Clint Conley's music. This is Clint Conley making absolutely beautiful and melodic music the only way he can.