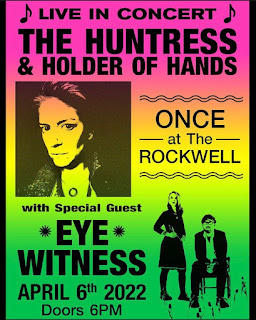 The Huntress and Holder of Hands' 2017 album Avalon has stealthily become an all time favorite. Although I did see MorganEve Swain perform solo late last summer, it had been quite a while since I saw The Huntress and Holder of Hands as a full band. Add to that the fact that they were playing in a new venue I had yet to make it to, and Eye Witness was opening, and it quickly became an impossible to miss show.

Eye Witness opened the show. They're an indie folk duo out of central MA making their debut as a trio. Rainy and Milo are now joined by Lovina on keyboard. Seeing as how I had never seen them, I can't compare them to their previous incarnation, but the trio played quite well together. One thing that surprised me is how loudly they played for an indie folk band. Sure, Eye Witness have some folk elements, but they rocked more than a little too hard to be truly folk. Plus, the music had some very dark vibes. An alt-rock band disguised as a folk trio playing dark music? Sounds like they're ideal to play with The Huntress and Holder of Hands. And they officially have made my "Must See Every Show Possible" list.

One thing I had forgotten about The Huntress and Holder of Hands is how much they rock live, and how loudly they do it. I quickly wished I had brought my earplugs with me, but that's just proof of me being old. They may get categorized as a folk band since they play with a fiddle, cello, stand up bass, etc., but they are a full on indie rock band with some dabbling in metal. Seriously, no one can turn the cello into a noise instrument quite like Emily Dix Thomas. Playing favorites off Avalon along with some newer songs (including the 2020 single "Doctrine"), MorganEve Swain and her band played harder than most bands expected to play loudly. "Borealis" and "Shake Off Your Flesh" are always obvious live favorites as they can descend into glorious chaos, but the newer, less familiar songs fit right in. One song (possibly called "Absence?") was introduced by Swain reassuring the audience that it was depressing. It was.

I also feel obligated to mention how great of a venue The Rockwell is. The Rockwell is a black box theater in a basement usually used for comedy and theatrical productions, but it makes a great music venue. There were some sound issues, but I think they're still learning the room. It's a small, intimate and seated venue, which is a rarity in Boston. Plus, I'm in my 40's so getting out of a show taking place on a Wednesday at 9:00 is a huge bonus.

Email ThisBlogThis!Share to TwitterShare to FacebookShare to Pinterest
Labels: eye witness, Ken Sears, live shows, the huntress and holder of hands, the rockwell